Ocean to Sky: The Story in Their Own Words

All unattributed quotes are by Edmund Hillary, from his book “From the Ocean to the Sky”

The Idea
“It was a sort of dream that Ed had had for a long time: the idea of going all the way up a river from the ocean and finishing up on the top of a mountain. And I think when he suddenly realised that he could do it in an indigenous New Zealand machine – the jet-boat – that it really struck.”  Graeme Dingle, in 1989 documentary Magic Kiwis

The River
“The Ganga starts where saints meditate, in the high Himalayas; it meets the sea in the Bay of Bengal.” Indian Government Tourist Brochure, 1977 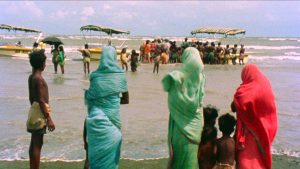 Ganga Sagar
The journey began at Ganga Sagar – ‘the divinely sanctioned starting point for any pilgrimage up the Ganges, where a very charming Pujari Hindu priest willingly agreed to come and bless our boats.” Jim

“I thought he behaved as if he was blessing jet boats every day!” Mike Gill“I’d never driven in surf before and I hit a huge wave” Jim.  “There was a very expensive noise at the back as the engine leapt off its mounts !” Ding

Tiger in the Sundaband
“Suddenly an air of electric excitement shot through the group, and one of our guides, eyes staring, seized me by the arm. “Tiger!” he said. “Tiger!

We were tense with expectancy, certain the animal would reappear, and it did. A huge beast, eight feet long. He stalked slowly forward in full view, the muscles of his powerful shoulders rippling under the sleek tawny skin, big head held aloft, staring straight at us, eye to eye. He gave a low growl, of contempt perhaps or disgust and glided inland into the gloom of the swamp. We drifted in silence, spellbound. Then came a deep-throated roar from less than fifty yards away, resonant with power and menace, like nothing I had ever heard before.”

An Indian Welcome
“We roared in our jet boats into the great city of Kolkata, under the Howrah Bridge. And the crowds were absolutely mind-boggling. Three or four million people lining the banks, all of them waving, all there to get a glimpse of the amazing jet boats and my father, Ed Hillary.” Peter

“We departed upriver with the cheers of the crowd ringing in our ears. The warmth of our reception was incredible.”“My feeling is that the Indian crowds who came to see us genuinely felt that we were making a pilgrimage.” Jim “I was moved by this river that inspired such affection in so many people.” Ed

Mountains
And away from the city,” the country boats with their great patchwork sails, moving along, and the singing of the boatmen. To be in this sublime, peaceful atmosphere was just wonderful. These absolutely stunning big river boats carrying cargos of rock and sand.” Peter Hillary.“I’m sure if you go back there in the twenty first century there’ll be motor boats, but they were not motor boats then.” Mike Gill.

Holy River
“Eventually we came to Varanasi, one of the most sacred cities in India, on a bend in the Ganga. The sun rose straight across the river, a magnificent sight. And so the two great symbols of life, the heat from the sun and the water from the river combined. And so at Varanasi we had a second puja.” Jim

“I think that puja at Varanasi was incredibly important. We were half way through our journey. The Himalayas were still out in front, but what had happened in the recent past – the loss of my mother and sister – was still very heavily upon our hearts. And I think something happened for Dad. And in a way it put to peace just a little bit of what had happened to us in the past.” Peter

“I think Ed changed before us actually, before our eyes. It was a very powerful moment.” Waka

Rapids
“We had been told that the first big rapid was some five miles on, but within half a mile we came round a corner to see a considerable rapid with big waves, and I thought as we plunged in “My God! If we strike this at the beginning of the gorge, what’s the rest of the river going to be like?”

“The walls of the valley closed in and steepened. The noise of the boats reverberated back and forth between the rock walls of the gorge, which would have been silent without us, for the smooth-flowing water made no sound.”

“But then we heard the distant roar of white water. We rounded a bend to see ahead of us the river steepening into a line of white waves, with the flick and toss of spray rising into the air. Jon went first, while we waited at the foot of the rapid: if anything happened to the lead boat he would need us to rescue the occupants as they were washed out into the tail-race.”

“Jesus, what a day! Chunderous rapid followed chunderous rapid in a blur, and slowly the rapids got steeper and more bony as the river cut deep into beautiful granite hills – but there was scarcely time to notice the beauty. I soon had that constricting feeling in my gut, that grips and leaves one completely exhilarated and feeling brave when it’s all over. Jim was driving masterfully, hovering on the brink of stoppers and slipping with minute precision between rocks and big breakers, applying the throttle exactly when needed. He sang the praises of the boats continually and with each rapid overcome, Ed and I would cry out ‘Incredible Jim!’ or ‘Masterly!’ and pound him on the back.”  Ding’s Ocean to Sky Diary

Magic Boats
“Our boats were acquiring the reputation of being magical craft, capable of ignoring earthy obstacles, as if they were chariots of the gods. Wild rumours were circulating amongst the locals; they said that our boats could perform prodigious feats: they could jump twenty – no thirty feet. More than that said others. “They can fly!” Shops were left deserted. Food was thrown aside half cooked. The Post Office was left empty, with the cash box lying open on the counter. “No worry,” they were saying. “Even the thieves have gone down to the river to watch ‘Ocean to Sky’!”

“One Pressman sadly complained, “ It is impossible to do anything. I cannot buy food. I cannot get my washing done. I cannot dispatch my articles.” “Why?” said I, naively. And he looked at me in astonishment. “Because of the jet boats, of course. All Garwhal is on holiday for the whole week. They have been waiting for ‘Ocean to Sky’.”

The Waterfall
“We drove up to the face of the waterfall. The whole river poured down over some huge obstructing boulders, a 10 foot high vertical wall of water. The area below was boiling and tossing. It was an awe-inspiring position and in a way I was pleased at the absolute finality with which the river had brought us to a halt.”

Pilgrimage
“Right from the beginning, from Ganga Sagar, we were aware we were doing what every Indian wants to do, which is to make a pilgrimage up the length of the Ganga. And it was just born in on us more and more when we took off on foot. We felt even more like pilgrims because there were people alongside us doing the same thing.” Mike Gill

Into the Mountains
“Arriving in the mountains, Peter wrote “What fabulous country, soaring rock spires, shattered glaciers, ghostly clouds swirling around summits and the mighty lammergeyers riding the mysteries in the air. Such is this splendid Himalayan panorama.” Peter’s Ocean to Sky Diary

“Sir Edmund Hillary’s expedition ‘Ocean to Sky’ is one attempt to unravel the secrets of the Ganga and its source in the valley of the Gods. Sir Hillary succeeded in boats through the Ganga right into the heart of the Devlok. It was only at Nandaprayag that the Ganga defeated him. According to reports reaching here, the Hillary team is now attempting to scale the Nar Parbat. The gods who have their permanent abode there might not be happy. The progress of the expedition will be watched with interest. The ocean was co-operative and pleasant. And so was the Ganga after absorbing all the sins of the land. But the gods may not; it is their playtime in the Devlok. They might not relish too much intrusion into their privacy. Daily Himachal Times, October 12th1977

The Rescue
“We headed up from our base camp without porters and carrying all the loads ourselves. Ed was a prodigious load carrier in his youth, but now he was 57”. Jim

“So our fairly rapid ascent from Badrinath up onto the glacial plateau beneath Akash Parbat proved to be one step too far for my father. Dad was sort of lying there, slurring his words, really not coherent at all.” Peter

“He looked like a corpse. He was totally grey. Unconscious. And it didn’t look like he was going to live.” Ding

“I’d lost my mother and sister. Here I was high in the Himalayas again. Was I about to loose my father as well?” Peter

“The team swung into action as if the whole expedition had been a preparation for this situation. No one said much – it just happened. For two months we’d been an infuriatingly disorganised bunch of individuals doing things according to our own whims. Suddenly, now, we realised we were in a bad situation and we’d have to work hard, and work together, to get out of it. Maybe Ed’s life was at stake – and we threw ourselves into the task with a rare sense of unity and purpose. The affection and loyalty we all felt for him suddenly seemed intensified a hundred times.” Mike Gill

“Peter had been distressed beyond words back at camp – on the verge of tears- and now he was out in front pulling like a huge carthorse. We were moving fast, everyone straining at the ropes and panting in the thin air.” Mike Gill

“I think we lowered him about 3000 feet in not much more than sixty minutes.” Ding

“And it did reach a point where he was saying “Well. I feel quite a bit better now.” We knew we were out of it then. ‘Cause it’s a very short lived thing once you get down. But he could have died up there.” Mike Gill. “It must have been pretty close you know. That form of edema can just, can take out the strongest people very, very quickly.” Waka

“By morning, Murray was back, after climbing up through the night with oxygen for Ed. Then we heard the joyous shouts of Indian Mountain Troops who’d also come up to help. And then we heard the helicopter.” Mike Dillon

“And then, there was absolute, complete silence.” Waka

“And then, one by one people just collapsed in a heap and wept. Just wept their hearts out.” Waka.  “And then we slapped each other on the back. And we regrouped. And we thought, well, what Ed would want us to do is to make sure we get back up to the sky.” Jim. “We climbed a lovely snow dome above the high camp, which we named Akarsh Parbat, Sky Mountain. And Ed got his wish. We did touch the sky”. Jim 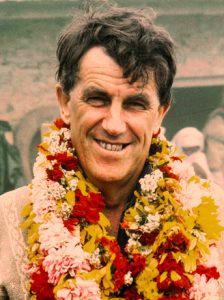